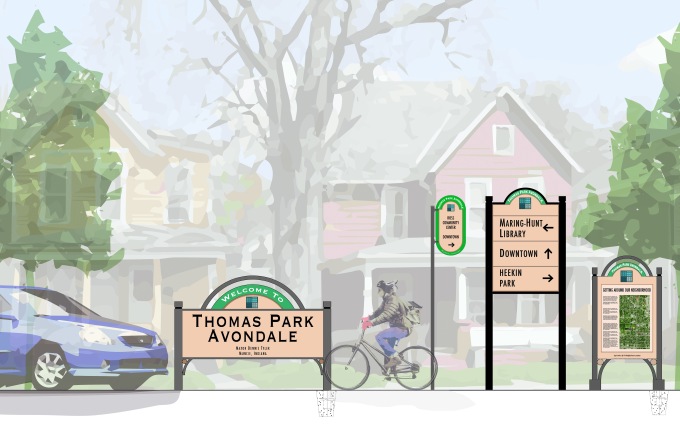 This initiative was created based on input from public meetings, surveys, and interactions with residents in the neighborhood. While conducting surveys in the neighborhood, we found that many of the residents we interacted with did not know the boundaries of TPA, and some did not even know which neighborhood they lived in. Furthermore, many visitors and Muncie residents from other neighborhoods are unfamiliar with where TPA is and what is located within it. 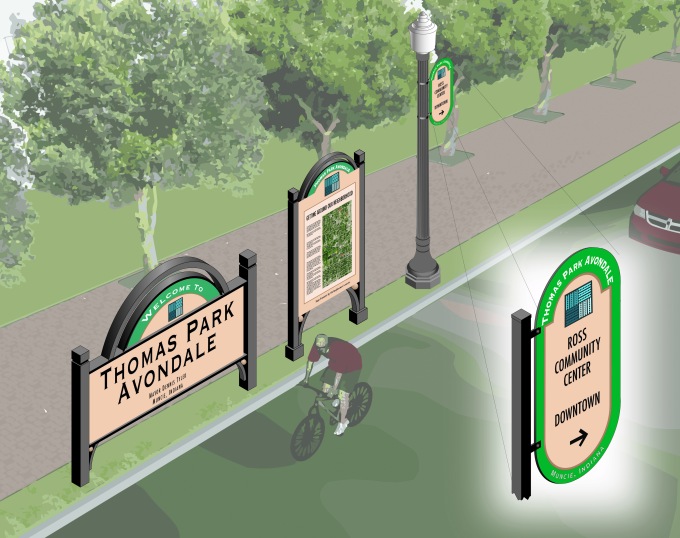 The first step in this initiative is to design the signs. Several ideas for this step have been created by Ball State students—examples are included in this action plan and can be found below. The final layout and design of the signs will be completed by the Department of Public Works (DPW). The City of Muncie established design guidelines for gateway and wayfinding signs in 2002 in order to keep them consistent across the city, and these design guidelines will largely shape the design of TPA’s signs. While the shapes, color, and materials of these signs will be consistent with those across Muncie, their content will be unique and each will display the TPA logo.

The second step is forming a focus group to push through and complete this initiative. This group would decide on the content and location of signs, and bring this information (along with the design examples included in this document) to City Council for review and approval. Once City Council approves, the proposal will be sent to DPW, who will finalize the designs, provide permits, and then order and install the signs. City Council meets on the first Monday of every month at 7:30 pm in the City Hall Auditorium, and the Board of Public Works and Safety meets every Wednesday at 9:00 am in the same location.

After ensuring that the signs meet the design standards set by the City, the decisions made by City Council and DPW will likely be based on budget and available funding. However, there are four locations within or along the borders of TPA that the city has identified as needing wayfinding signage. By using this information, the focus group could feasibly get at least those four signs approved and installed without having to alter the city budget or request additional funds. The focus group could also reach out to the Department of Community Development to request Community Development Block Grant funds to be used for additional signs. The financial burden may also be shifted if the focus group organizes a volunteer group to install or maintain the landscaping around gateway signs. This could be organized into a workday or block party, and could further demonstrate resident interest to City Council and DPW.

The focus group has an additional option of installing informal, do-it-yourself wayfinding signs provided by the organization Walk [Your City]. Walk [Your City] is an online tool that allows residents to design wayfinding signs that promote walking and cycling to destinations in their neighborhood. After choosing sign locations and designing them online, Walk [Your City] then prints the signs on waterproof corrugated plastic for $20 each, and ships them to the resident to be installed. Residents then install the signs on pre-existing posts with industrial zip-ties. The signs also include a QR scan code that, when scanned by a smart phone, will give the pedestrian mapped directions to the destination. While these signs may not look as formal as permanent signs installed by the City, these informal signs are still effective and are wonderful displays of the residents’ commitment to the neighborhood. In some locations, these informal signs have impressed city officials enough to result in permanent signs being installed. More information on Walk [Your City] can be found on the website listed below.

This initiative would best be accomplished by a resident focus group, which would be best organized through the neighborhood association. The focus group should be able to decide upon sign location and content within one or two meetings and propose the initiative to City Council within a month.

Neighborhood gateway signs are located along highly used streets into and out of the neighborhood. As such, a suitability map was created and is included below to suggest gateway sign locations. The map also shows traffic flow information, with green representing relatively high traffic volume, yellow representing medium traffic, and red representing low traffic. Wayfinding signs are also typically placed along high-traffic routes, although it may also be desirable to place them at critical intersections near attractions or community resources such as the Ross Center, Maring Hunt library, parks or even the grocery store. Our recommended locations are included on the same suitability map. These locations have also been coordinated with the Decorative Crosswalks Initiative in order to locate pedestrian wayfinding signage near other pedestrian infrastructure. 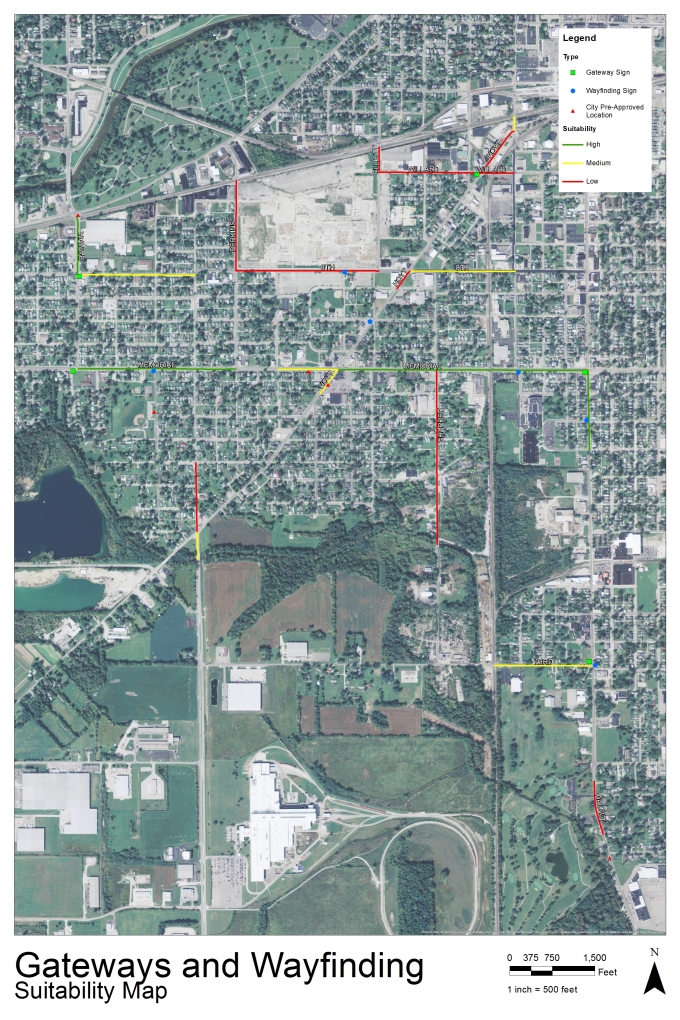 Notorious for heavy traffic congestion, downtown Atlanta, Georgia, was a difficult place to navigate for both cars and pedestrians. Pedestrians, feeling lost in a sea of automobile traffic, felt that downtown was too hard to navigate on foot. Drivers battling heavy traffic had a difficult time navigating the downtown and finding destinations. In response to this, the organization Central Atlanta Progress and the Atlanta Downtown Improvement District partnered with the Midtown Alliance and City of Atlanta to start a wayfinding signage program.¹ The program designed and installed pedestrian and automobile oriented wayfinding signs across the downtown and midtown areas of the city, and throughout several adjacent neighborhoods.¹ This was an extensive project that took nearly two years to propose and implement. The project was paid for in part by the City of Atlanta and the Improvement District.¹ An Improvement District is a program where business owners in a specific location group together to self-impose an additional business tax, which is then used to improve the district. Today, the wayfinding signs throughout Atlanta are known for making the area more navigable, memorable, and attractive.¹ 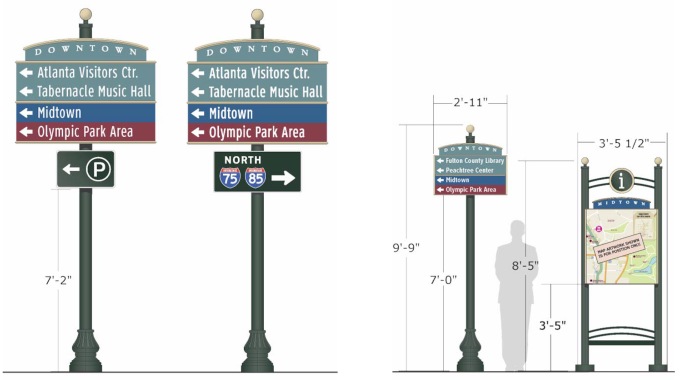 Walk [Raleigh] and Walk [Your City]

In 2012, Raleigh, North Carolina, graduate student Matt Tomasulo saw a need for wayfinding signage in his city. Matt also noticed that most of his friends and neighbors did not realize how close and walkable most amenities in Raleigh were. In response, Matt decided to create his own wayfinding signs that encourage residents to get out and walk or bike to certain destinations in town. In January 2012, Matt and a few of his friends made 27 signs with their own money and mounted them on downtown street corners.²

However, as the signs had not been previously approved by the City of Raleigh, the signs were soon removed and put into storage. The response was overwhelming—1,255 Raleigh residents got together and petitioned city hall to reinstall the signs. Seeing that the signs were useful and loved by the residents, the city reinstalled the signs and began to draft a plan to replace them over time with permanent signs.³

Matt’s project in Raleigh was considered extremely successful and the signs, as well as the rest of downtown Raleigh, began receiving more and more attention in the media. Matt and the city began receiving requests for help with wayfinding signs from cities all over the world.³ In response, Matt founded Walk [Your City] as an online tool to help residents, neighborhood associations, clubs, and city governments make their own wayfinding signs quickly, easily, and for a low price. By creating an account on the Walk [Your City] website, users can easily design and order wayfinding signs, and install them on their own. Today, individuals and neighborhood organizations around the world are using Walk [Your City] signs, and 1,275 signs have been created by over 420 users in 35 countries.² City governments are also ordering the signs and using them as an inexpensive pilot program that can be started quickly. Please see the What section above for more details on how this system could be applied in TPA.³ 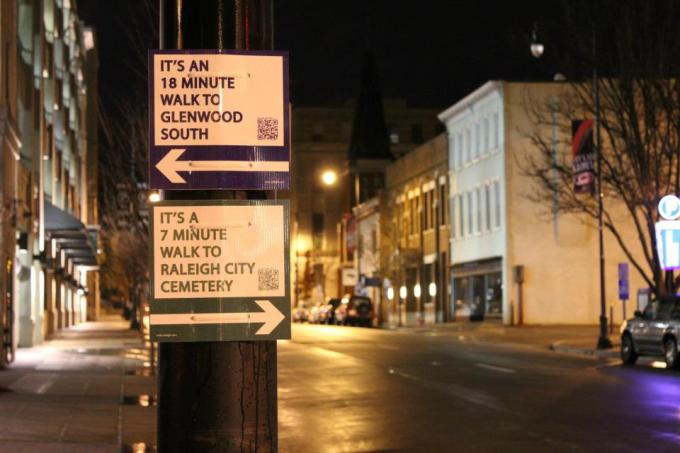 Funding for gateway and wayfinding signage is provided within the city budget and is allocated to DPW. If the city does not have the funds available, additional funding through CDBG funds could possibly be accessed for this through the Department of Community Development. This requests for funds would likely be made by City Council. Working with District 3 Councilwoman Lynn Peters would be the best way to mobilize City Council resources for this initiative.

If the focus group should choose to pursue an informal wayfinding sign program, visiting the Walk [Your City] website at http://www.walkyourcity.org/ is the best way to create and order do-it-yourself sign kits for a low price.