The initiative, “Decorative Crosswalks,” relates to the MAP Initiative 4, “Creating Attractive and Desirable Places,” works toward revitalizing Muncie’s physical environment. It relates specifically to Action 5, “Improve Appearance of Gateways,” which calls for the identification of gateways and enhancement plan for each.

Residents expressed concerns about beautification on the neighborhood survey as well as during the February 2016 Thomas Park/Avondale Neighborhood Association (TPANA) meeting. Another concern was that the residents were not always aware of the neighborhood’s boundaries. In a collaborative effort, decorative crosswalks are a method to better identify TPA’s boundaries.

It is important to recognize the identity of a neighborhood. TPA could have a colorful representation of their boundaries. This initiative offers the community a conversational piece between many demographics. This could offer a better sense of place and pride in the area.

TPA traffic counts, retrieved from the Delaware County GIS Department, detail the levels of vehicular traffic and location of busiest intersections. This data helps prioritize the busiest intersections near the neighborhood’s most popular amenities. Having such criteria allows decision makers to pinpoint the most efficient locations for this initiative. The key decision makers could be: code enforcement staff, the citizens of TPA residents, the City Council, and the Mayor. Having already prioritized the intersections, there will then be a need to gain sponsorships for materials and volunteers if the public is to be involved in creating these crosswalks. 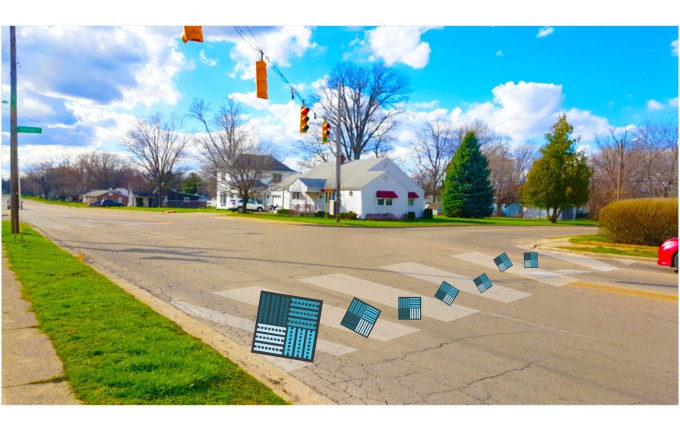 Pam Harwood, a Ball State associate professor, is working with the Muncie Arts & Culture Council to eventually form a Public Art Advisory Committee. The Muncie Arts & Culture Council are conducting community Dream It Design It workshop towards the end of May to determine what the neighborhood organizations want and where their respective crosswalks should be, if not decided. Neighborhood organizations will be paired up with an artist and College of Architecture and Planning student(s) during the workshop. CINTAS or Muncie Makes Lab are being considered as venues for the workshops. Follow up to this workshop, in July, explains the process of making a stencil for the crosswalks on the laser cutter. Finally, community build events with East Central will be held to complete as much implementation as possible by the first Thursday Art Walk in October.

The map below (Figure 2) shows TPA’s average daily traffic (ADT) on the main streets. This initiative could apply to Memorial Avenue at first because it is a major thoroughfare through the neighborhood. Priority intersections could be Memorial & Batavia, Memorial & Walnut, Memorial & Hoyt, and Hoyt & Port. The priority map has high, medium, and low ADTs, and the high priority areas should be targeted for decorative crosswalks so more drivers will slow their speeds at busy interactions and pedestrians can enjoy new, colorful crosswalks.

Houston’s (Texas) Midtown Management District Urban Planning Committee had its first “colorful intersection” implemented in May 2015 at Elgin & Louisiana.¹ They cited, “sprucing up crosswalks and provide additional safety clues for drivers to expect pedestrians and bicyclists,” as the purpose for their initiative. University of Houston professor Aaron Parazette created the design. The chairman of the Midtown Management District quoted the project at $20,000. Future redesigns could cost half that total. Midtown partnered with the Houston Department of Public Works to seek approval. Observations of safer driving habits were seen. This intersection has 25,000 vehicular traffic counts along Louisiana and 17,000 along Elgin.

In St. Louis, Missouri their Community Development implemented multiple crosswalk art installations.² Tower Grove Neighborhoods Community Development came under Federal attack due to safety regulations and guidelines some of the art violated. In order to sidestep this they will let the infringing crosswalks fade; these crosswalks included heating technology that makes the art last five to ten years and elaborate designs that could halt pedestrians mid-intersection. The idea started a few years ago in 2014 at their “Better Block Engagement Meeting”. Fifty-three citizens of the neighborhood participated in community planning and targeted the area. Citizens then voted for the top priority areas. Volunteers were then sought and the event was promoted as a beautification project.

“The repeating fleur-de-lis pattern is symbolic of St. Louis.  The neighborhood’s name or logo is included in the crosswalk design, as a branding effort for the community.  According to survey results, the painted crosswalks impact residents’ sense of pride in the community, visibility of the pedestrian realm is increased, and the pedestrian’s sense of safety is increased.” HUD Community Development Block Grant via the St. Louis Community Development Administration funded the respective meetings and projects.³

Office of Community Development may be a perfect resource to provide funding, but there may be a higher likelihood of implementation if the community raises funds. The installation of a small-scale decorative crosswalk will be low cost, but the more intricacies the higher the price (including the price of paint based on permanency). Fundraisers or donations may be the best idea or an input from neighborhood anchors (offering advertisement – name of the entity shown at the corner of the crosswalk).